A downloadable game for Windows

The current demo of Cone game is for mature audiences only. The game contains user generated messages, with risk of profanity and offensive content. We are continuing to improve and develop the game to reduce the possibility of offensive material, however until we can confidently promise this,  please report any offensive content to our email / discord:

Custom messages can be disabled in the start menu, you may face issues with Twitch and YouTube if potential user messages break guidelines. Stream at your own risk, however we recommend disabling messages if you are concerned about this factor.

Compete with other players by placing your cones  in the hardest to reach spots.

The Cone Game is a persistent online world - every cone that is placed updates in real-time worldwide. That's right - every cone you see has been placed by another player and it’s your job to reach them!

You play as one of the many cones that have been placed atop the head of the Duke of Wellington's statue in Glasgow, Scotland - Now it's your chance to prove you're the very best one!

There are lots of spots to put a cone in Glasgow, including:

You could put a cone over here, or over there, or even up there. And when you place it, everyone else can see! Just.. avoid the Clyde… cones aren’t the best of swimmers!

The Cone Game is a persistent online  world, with cones from all around the globe looking to come out on top. Once you reach another player's cone it will change from a miraculous red cone filled with ambition, to a yellow melancholic shadow of itself, destined to watch as others surpass it… In order to stop such shame befalling you we recommend only placing your  cone in only the hardest to reach places. Don't give up, we believe in you!

The cone that has stood the longest gives out a majestic beam of light. That’s the proudest cone in the world... place your own next to it and show it that it’s not very special after all.

In order to reach the top in the world of cones you are going to need to think (and move) like a cone:

Remember, a true cone doesn't go for just the tallest spot on the map... but the spots that make other players stop and ask “how did that get there?!”

Now while a world filled with cones might seem like enough to satisfy even the most voracious gaming appetite, There are still some secret buttons to discover and playground toys to interact with. Look around and discover the fun Glasgow has to offer!

Are you a fan? Other developer or publisher? Get in touch at: contact@darkroom.games.

Cone game is a prototype made in two weeks, but we are happy to continue the project if we have enough fans interested.

i played this game and it was really funnnn!!!!!!

My video on the game.

Don't forget! you can lower the graphics by pressing escape and selecting an option

Good: a great and original concept, simple and innocent in design but complex to play and master. The graphics are simplistic, so people with poorer GPU's(me) can run it.

Bad: The controls are a bit iffy. Sometimes you can move freely on your base plate, sometimes you can't and there's not much indication for when you'll be able to move. Collision is also off, the mouse icon will highlight, signifying I can attach there, but I click and then suddenly the collision detection goes away.

A great idea and will make for amazing YouTuber/streamer-bait in its current state, but I think some slight refining to the controls would make the game 10 times more enjoyable to play. I will be keeping an eye on this game, it has potential!

Oh and one last thing: anyone else having SteamVR open whenever you launch the game? Is that just me? Very strange.

Thanks for the feedback! and regards to steam VR, Unreal Engine has it enabled by default so it'll open steam VR for those who have it. All these issues will be addressed in the next update!

Thanks for the reply! I look forward to this next update.

I have deafeted some of your cones, I took back the one you deafted from behind the statue up in the window. :D

@darkroom_games Your Game Was Hilarious Indeed! I Raged a lot but I still had crazy fun! Please Make More Simulators and Notify Me @SirWinnyYT (Twitter)

Great game! Really enjoyed hinding my cone, but i didn't get how i can defeat other cons, probably because i skiped it

You stand next to a "red cone" and press "E". It changes them yellow and gives you another cone

Really disappointed. I run the .exe file, game opens immediately closes and the .exe file disappears. Can only get it back if I unzip it all again. same thing then happens! Any help would be appreciated. Was recommended to me. Thanks

Thanks for your feedback, we're sorry you've been having issues. Try downloading the latest build, it's just been updated - Let us know how it goes!

Hello! i had a lot fun playing your game! there are some issues with the game like the grabbing mechanic needs to be worked more because i ended up getting stuck and couldn't move or grab anything but over all i had a lot a fun great job! also i made a video so please enjoy me trying to be the best cone i can be!

Thanks for playing! If you're having performance issues, there's graphics settings in the pause menu

Pretty cool strand type game :) I'm kinda annoyed by the movement though. When I stick myself with the bottom and move forward, sometimes the cone stops movement half way, feels like gimbal lock or something. Either way, I would love to simply press forward at that moment and actually move forward.

thank you for your feedback! 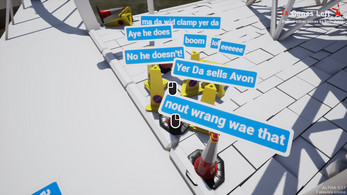 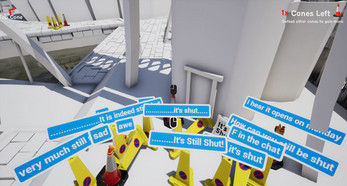 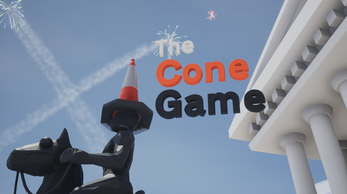 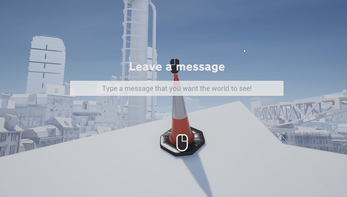 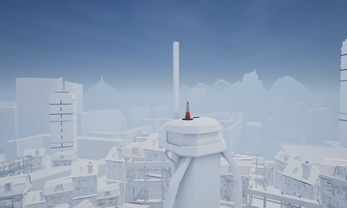 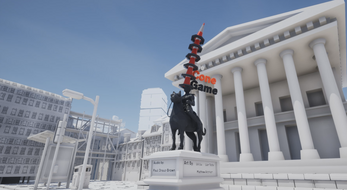